Planning, Execution, and Processing - Getting the Shot

As part of planning our family road trip over the Christmas and New Year's holidays to southern Utah, I wanted to spend some extra time in Capitol Reef National Park. The main reason for this is we were doing a similar trip in 2018 when the government shutdown closed some of the parks, Capitol Reef being one of them. So we only got to spend a half day there, which was enough to make us determined to come back again to see more of that park!

Knowing we'd be camping in Capitol Reef at the Fruita campground, right next to the Gifford barn, I wanted to plan for a night shot that included that barn. I knew the cliffs behind the barn were to its north-northwest, so I thought composing a star trails photo would be a really cool shot (to get a circle of stars, you need to be pointing north and include the North Star). I also wanted to use the setting moon to light the canyon walls behind the barn, instead of having them in silhouette. Seeing that we'd be there right before a full moon, timing was essential to have just part of the night in moonlight and the rest dark. Using the Photo Ephemeris app, I determined I'd have 1 or 2 nights in the EARLY morning to potentially get what I wanted. Checking the local weather, along with the solar and lunar rise/set times, I decided the morning of December 27 would be my best opportunity. The day before, I composed the shot and used some rocks to mark where to set up my tripod. Then I set my alarm for 4:30am so I could get some shots with the setting moonlight then more shots with a dark sky to get the star trails.

Everything that morning went exactly as planned. The sky was clear, the moon was low and shining on the canyon walls. I setup my intervalometer for 20 4-minute exposures. During the first few shots I light-painted the barn, using a "straw" color filter on the barn, field, and fence, and a "light blue" filter on the barn roof. I let the moonlight naturally light the canyon walls. After the moon set, the exposures continued for another hour or so to get the star trails.

Getting back home, the post-processing of the 20 images taken during the shoot began, and I soon realized I needed to process my image as if it were 2 separate photos - process the foreground, barn, and cliffs as one image, and process the stars and sky as another. The reason to do this was because the moon was still above the horizon in the first few shots, which blew out the sky, so I had to exclude those from my star trail shots or else I'd have a light blue sky. Also, I wanted the barn and cliffs to have a warm yellow-orange tone while the sky needed a cool blue tone. I combined/blended all the images as layers in Photoshop, then selectively erased the sky from the early (moon above horizon) shots. Once those were as I wanted them, I flattened the layers then finished off the tone, levels, and saturation in Lightroom.

All came together into what I consider a really cool shot, and one that was a lot of fun to work through, from planning to execution to processing! 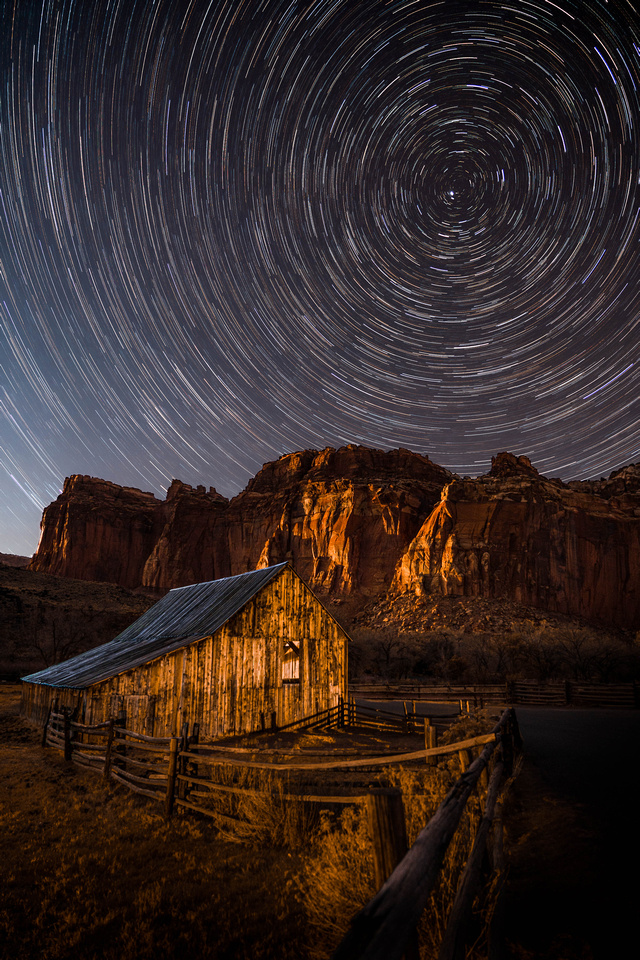