As 2016 comes to a close, I'd like to share with you what I'd consider my favorite photos of the year. I'll also give a description of each photo and maybe why I chose it as one of my best for the year. These are ordered by date taken, not by preference. I'd love for you to comment on them: which one is your favorite, what you like/dislike about each, or if you have any questions around them. I'll be happy to respond within the comments so all can see and provide their own perspective. Thank you, and I hope you enjoy my year-end review. 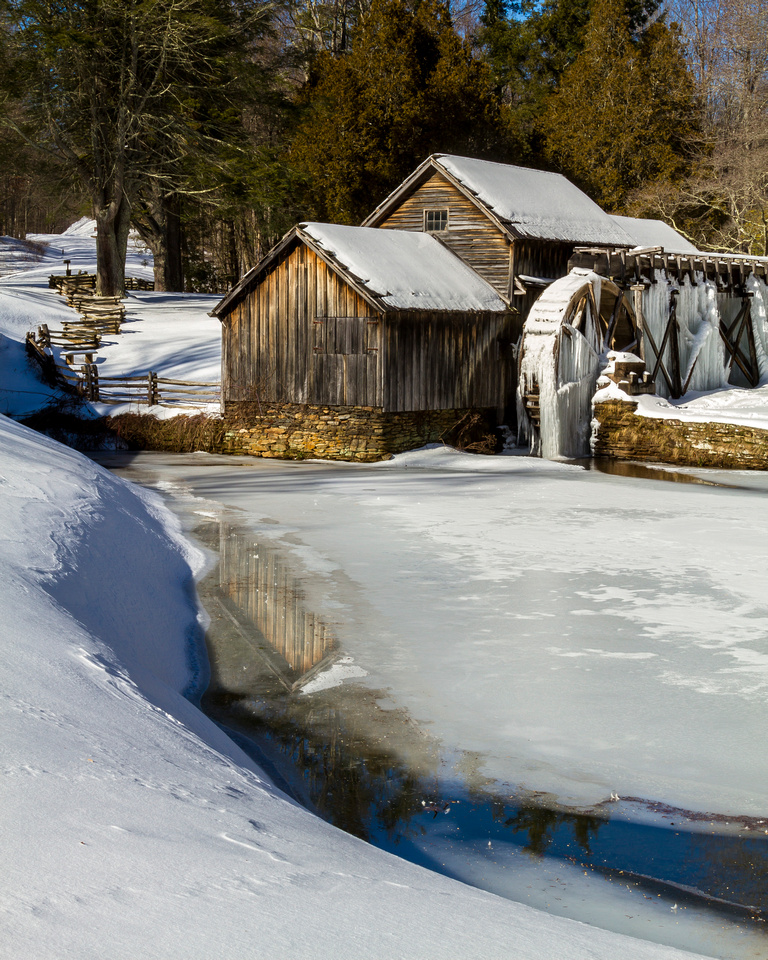 This was shot in January after a sustained cold period followed by a sizeable snowfall. The Parkway was impassable by even 4WD (at least mine) so I ended up walking the mile or so to the Mill. This was shot toward late afternoon which started to cast some shadows on the snowbank and highlight the zigzag patterns of melting and refreezing windblown snow on the left. I also liked capturing the reflection of the Mill in the partially melted pond. Although Mabry Mill has been shot thousands of times, I really like this shot for the above reasons. While there, I also learned of the "back way" to the Mill, so maybe this winter I might be able to get there a bit easier for more photo ops. 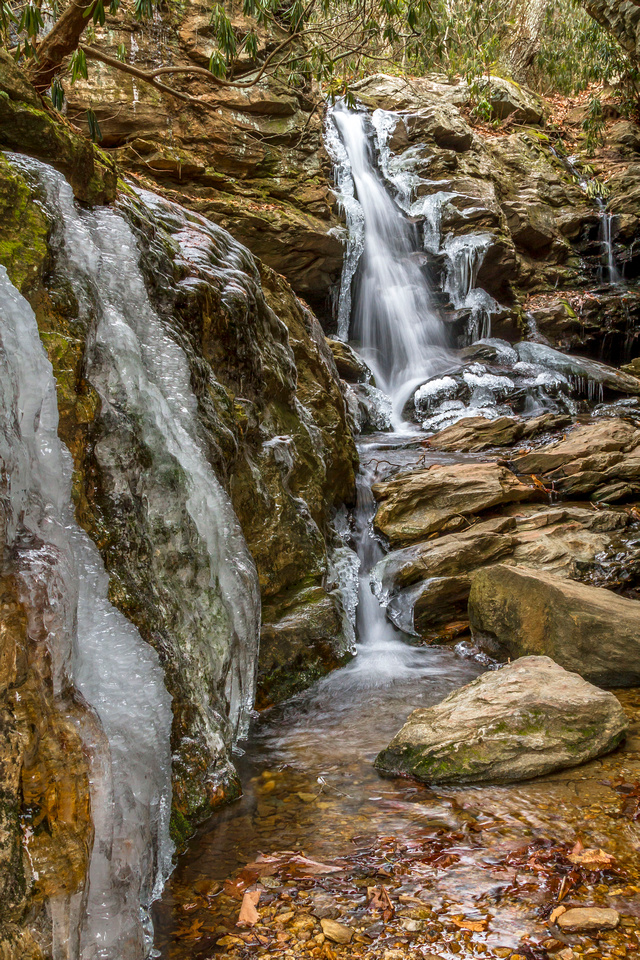 A shot taken in February after another long cold snap. This is the upper section of Window Falls (you have to crawl through the Window to get to it). What I really like about this shot is the "wedding cake" tiered effect alongside the waterfall, the flow of the water from the falls to the foreground, and the buildup of ice on the left from water seeping through the ground and rocks. 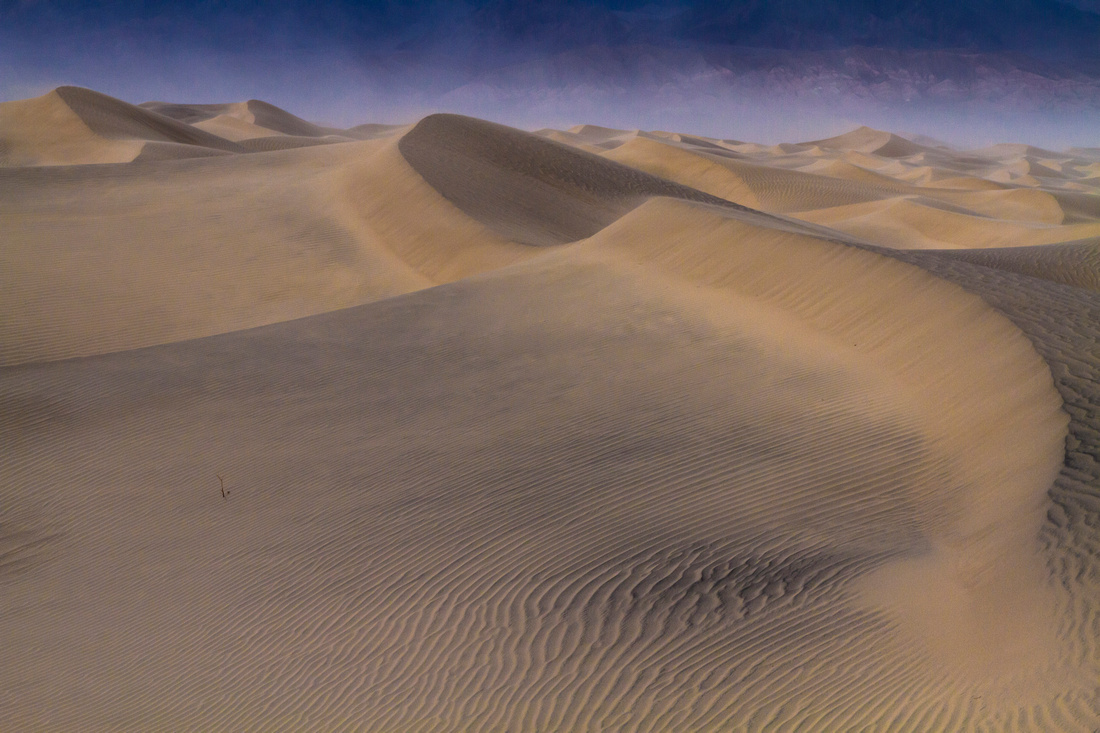 I wrote a separate blog about my visit to Death Valley in May. If I were to choose my favorite photo of the year, this would be it. Shot in 40+ mph winds, the sand blowing across the dunes added an effect that is hard to pick out or even describe. I'd probably compare it to how you'd see fog in a forest, but here it's the desert! The purple cliffs and mountains in the background were muted by cloud of sand hovering over the whole region. 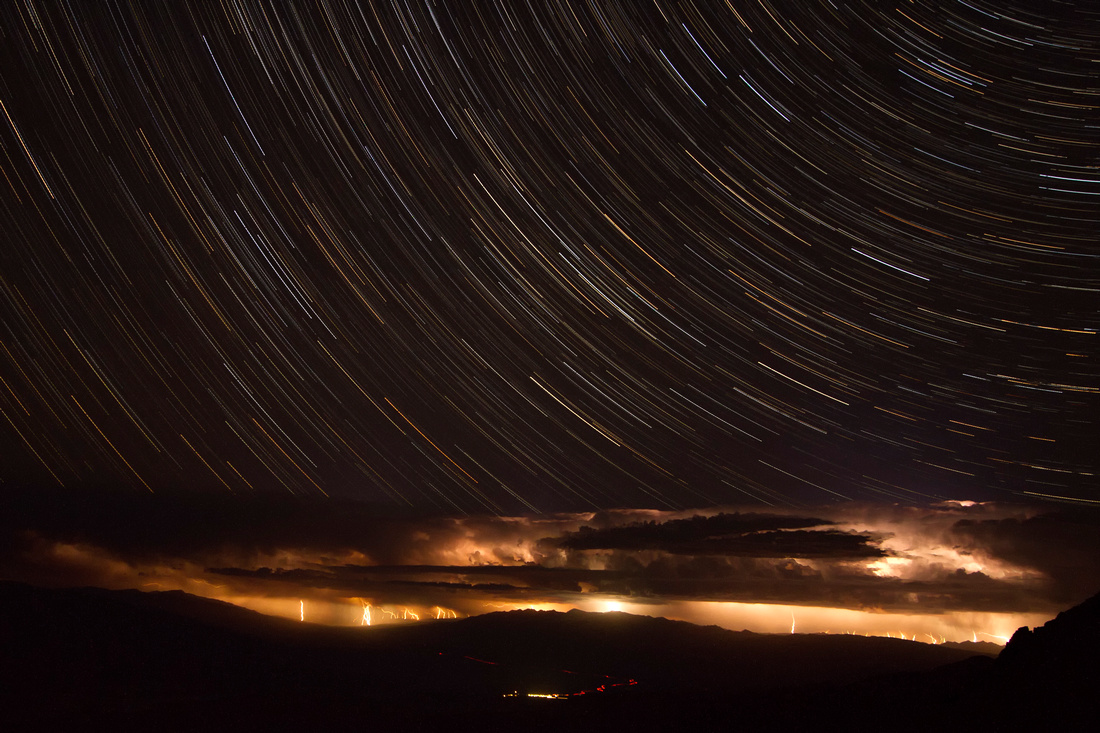 I'd call this my "lucky accident" shot of the year. After leaving the sand dunes of the shot above this one, I drove out of the Valley to find a place to get a few hours of sleep and shoot some star trails and the Milky Way. Where I ended up was at an overlook called "Dante's View", which looked almost 6,000 feet down into the Valley. To my surprise and delight, the thunderstorm that chased me out of the dunes had settled in around Furnace Creek. Being in the desert, the sky above the storm was completely clear. I ended up taking several long exposures and blending them together to get the multiple lightning strikes of the storm combined with the star trails. 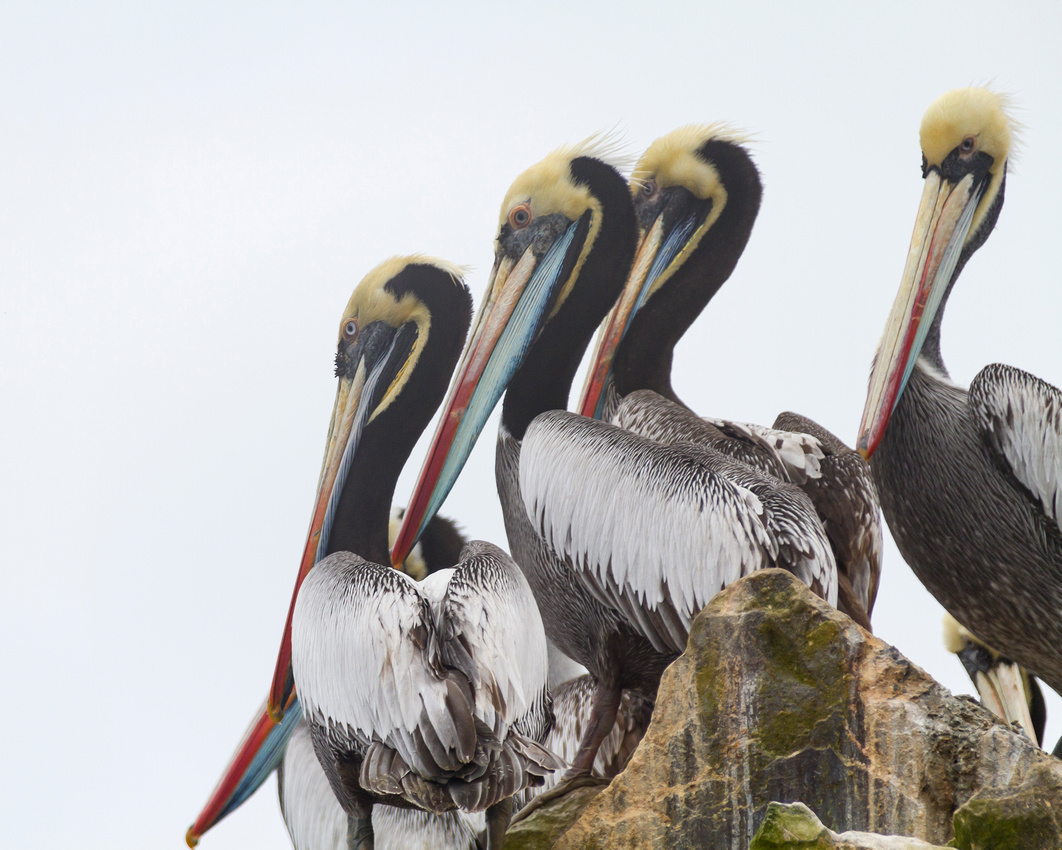 My big trip this year was to Peru, so it's no surprise several of my "best" shots came from this trip. During an excursion out to the Ballestas Islands Natural Preserve, some of the islands were covered with thousands of pelicans. I was able to isolate this small group and contrast them against a non-distinct overcast sky. 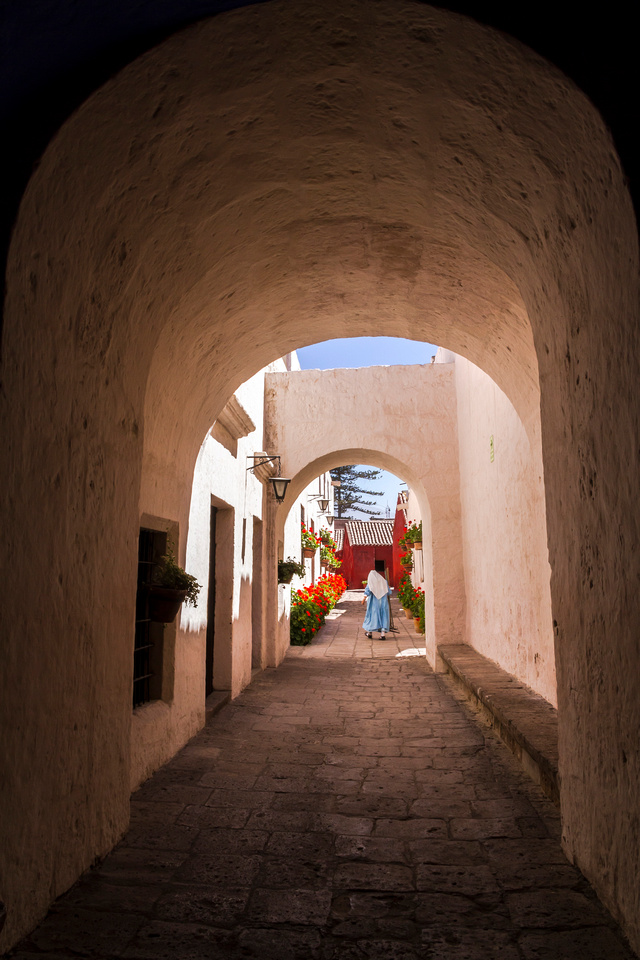 This is an amazingly beautiful monastery approximately 450 years old, known for its stonework and colorful walls. While composing this shot, a nun happened to come out of a side corridor and add a personality and color to what I thought was an already great photo. She was the only nun I saw in the few hours I spent in the monastery, so I felt very fortunate and blessed to have captured this shot.

Colors of the Andes, Peru 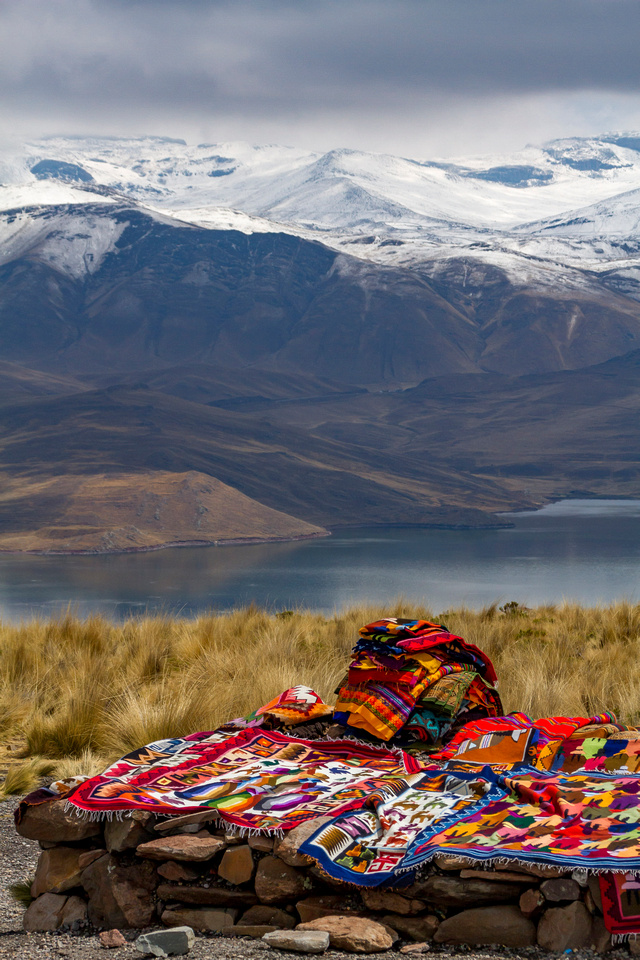 While crossing over the Andes between Arequipa and Cusco, we stopped at a high pass with a spectacular view of the mountains. Some Peruvian blankets were spread out for sale, and I thought they added a nice splash of color to the browns and grays of the meadow and mountains. 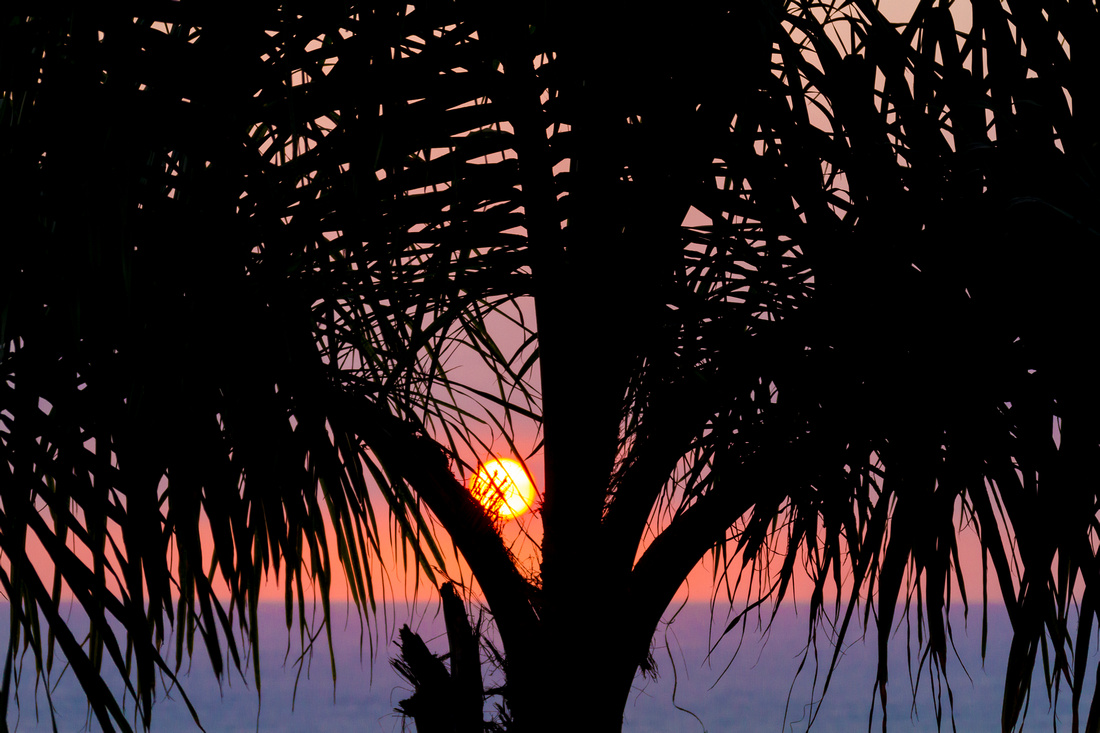 My last day in Peru ended with a beautiful sunset. I was walking along the cliffs overlooking the ocean in the Miraflores region of Lima. As the sun got lower on the horizon, the haze in the sky became a beautiful glow which was reflected onto the water. I found a palm tree whose branches created an ideal frame of the sun while still showing off the beauty in the sky and water.

The fall colors this year peaked later than usual. This shot was taken in mid-November. What I really like about this shot is not just the waves of color from red to green to yellow to orange then back to red, but also the strong vertical lines of the tree trunks contrasting against the mostly horizontal alignment of the leaves. The leaves were from smaller trees not included in the frame, which made this possible. 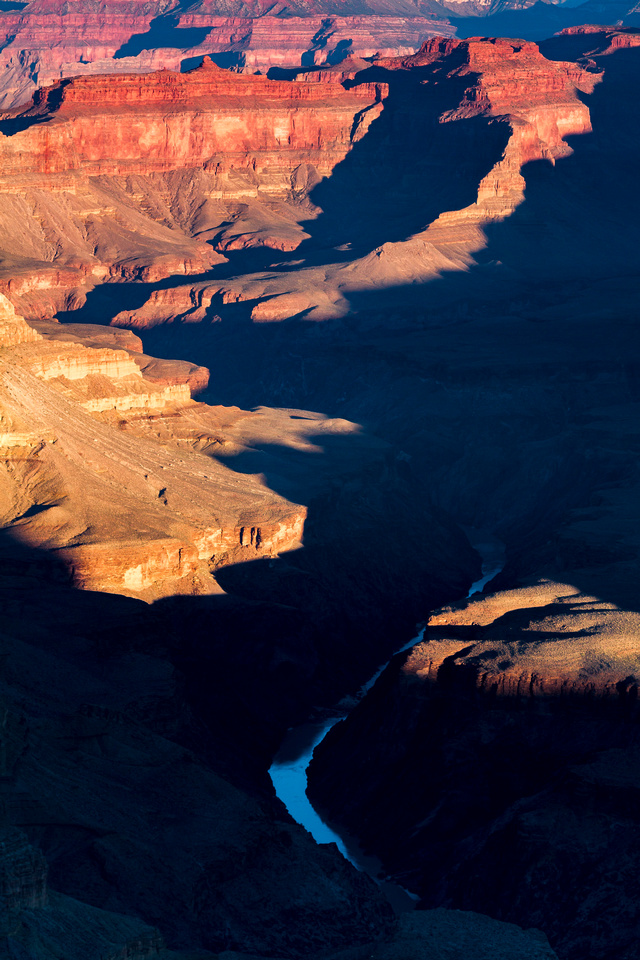 I shot this from Pima Point on the South Rim at sunrise. What I really liked about this location and the shot was that I was able to capture the light reflecting off the Colorado River. The pattern of the river is a mirror of the shadows of the canyon walls that the river is flowing into. Combining the two highlights the power of the river as it meanders through the canyon.

So these are my favorites. I really hope you like them as well, and please give your comments on them. Have a wonderful New Year and 2017!