Not what I expected

Last week I was out in Las Vegas for a conference, and had almost 24 hours between the conference conclusion and my scheduled flight. Seeing it was to be a new moon, and the Milky Way would be rising around midnight, I found it to be a perfect opportunity to rent a car for a day and run over to Death Valley for an evening photo shoot! I'd sort of planned out what I wanted to go for, staying around the Mesquite Flats sand dunes after sunset and shooting the Milky Way rising over the dunes. Well, the weather had a different set of plans! Driving down from Hells Gate I could see a huge cloud of sand hovering over the dunes. I knew I'd experience something either really cool or really bad. When I got to the dunes around 4:00 it was 104 degrees and WINDY!!! I thought, "well this will get rid of any footprints on the dunes" and took off for the location I'd scouted online, with photo gear, water, and some snacks. This turned out to be AMAZING! The winds blew beautiful lines in the dunes and softened the images into looking like watercolor paintings. 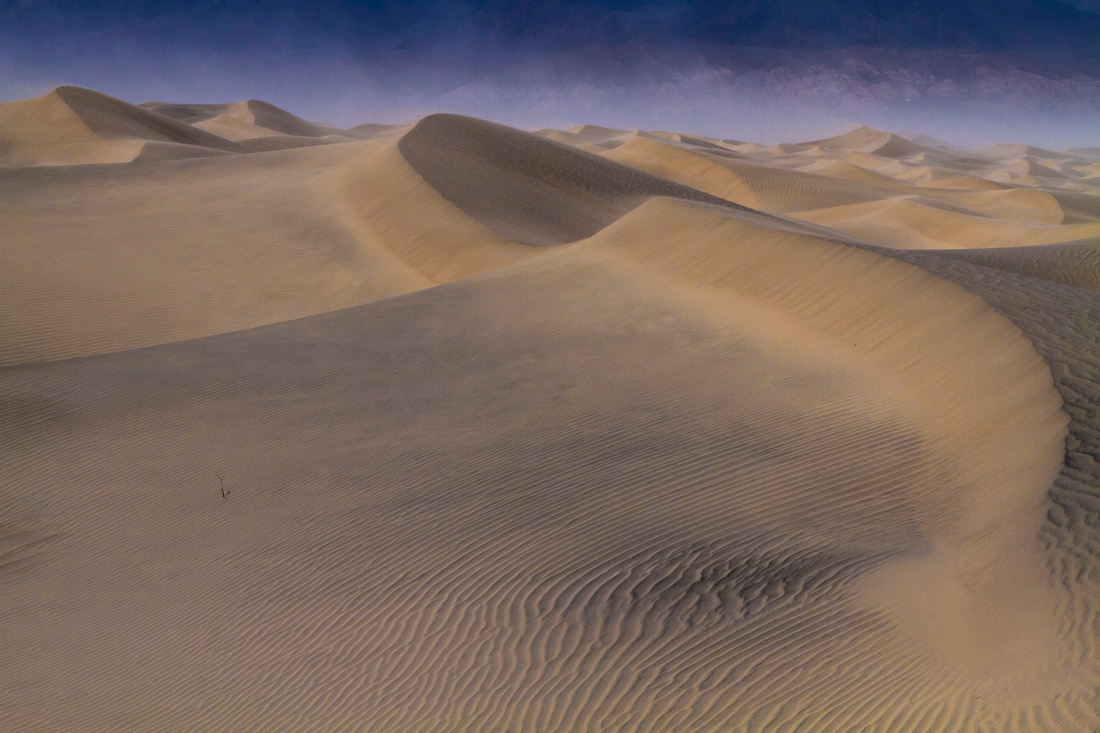 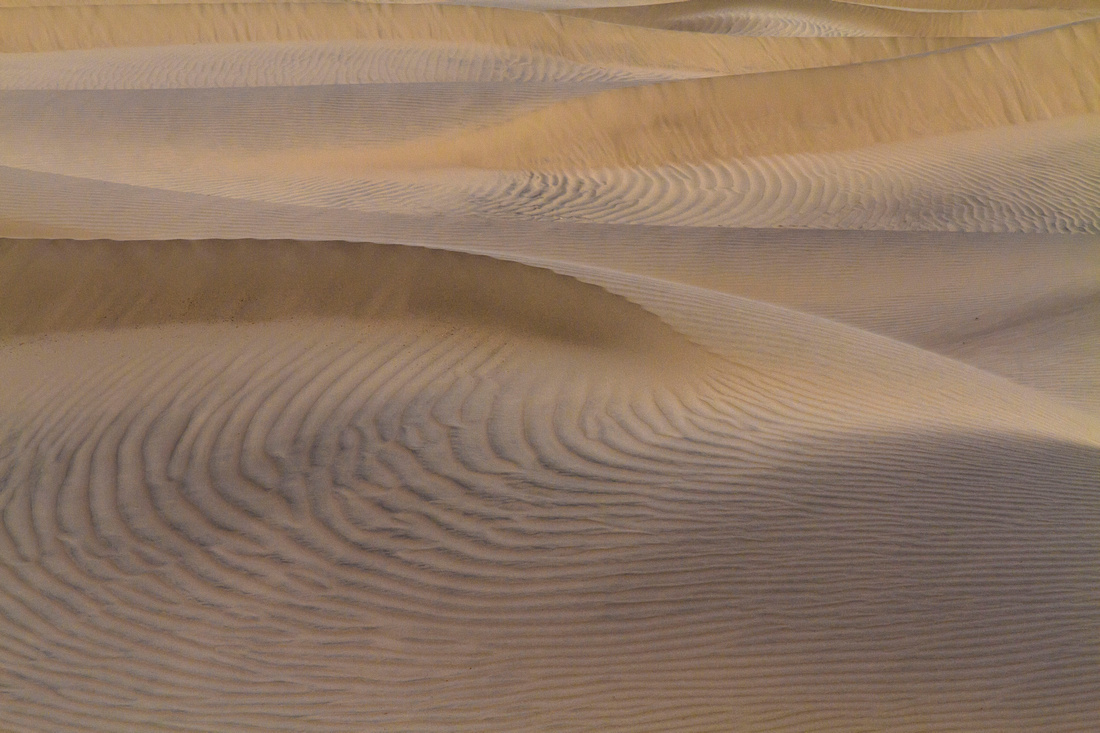 The longer I stayed, the windier it got. But what fun it was! Here's a video from where I was shooting from. I end up being about 20 feet from the camera and yelling, but you can't hear me!

As the afternoon turned into evening, more clouds rolled in, adding to the drama of the scene as well as making things even windier. At one point I was leaning pretty hard into the wind just to stand straight. But I kept shooting. 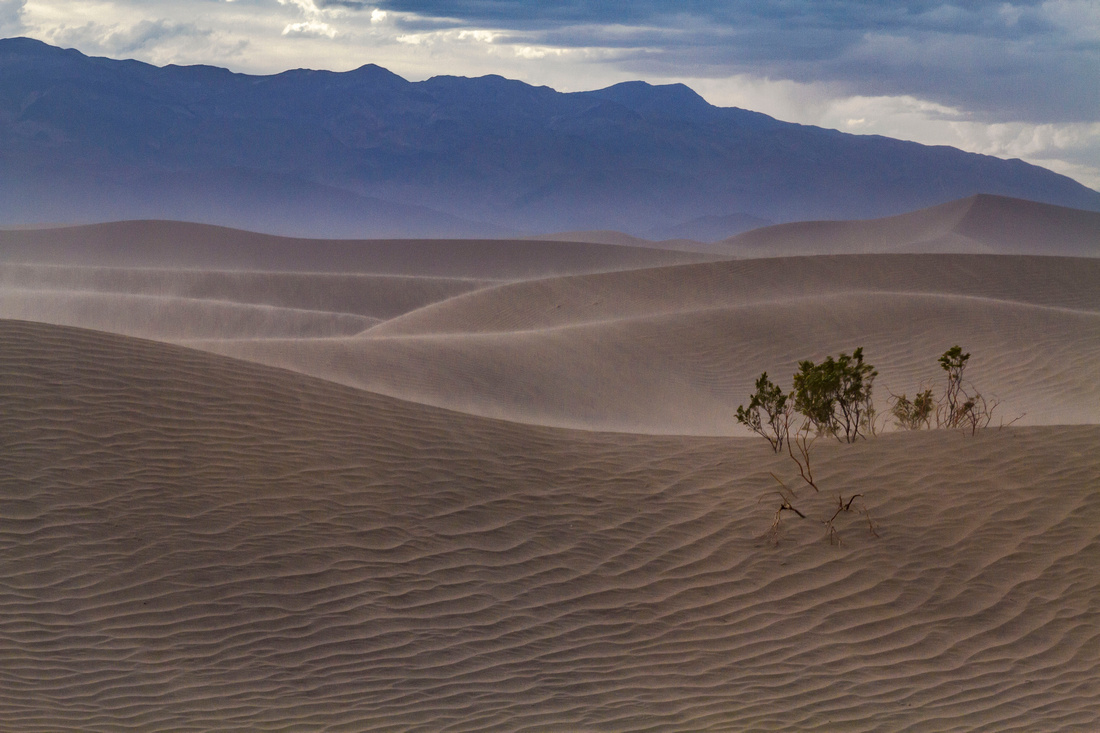 Maybe if I'd thought about what the sand could be doing to my camera, I wouldn't have had as much fun, but surprisingly my camera doesn't show any signs of being sandblasted for a few hours! I stayed through sunset, and even though the setting light was muted, I feel I still got some good shots out of it. 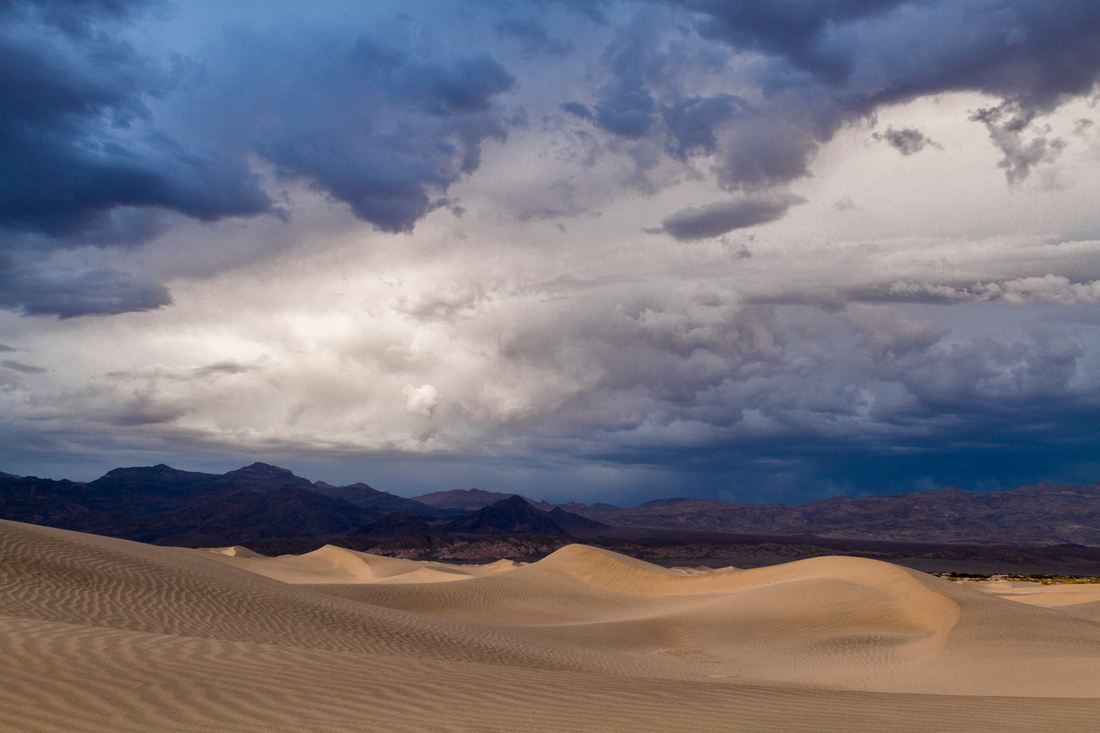 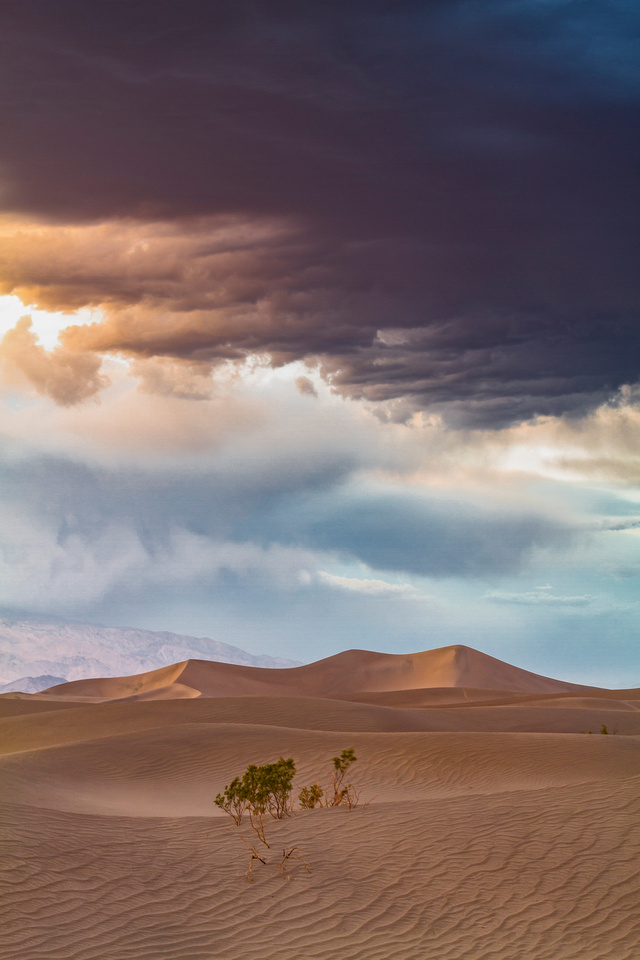 The winds finally died down somewhat, but it got even cloudier with some spits of rain drops. It was clear I wasn't going to get the starry night I was hoping for, at least from this location.

Seeing as my "sand dunes Milky Way" shot was looking very doubtful, I thought about where else I could go for a possible cool night shot. Since I'd never been to an overlook called Dante's View, I figured I'd go up there and see what that was like. So I headed up that direction and arrived there around 10pm, almost 6,000 feet directly above Badwater Basin.

To my surprise, the clouds had settled between Furnace Creek and Stovepipe Wells and were putting on an amazing lightning display. At first I was in disbelief, then really glad I'd left the sand dunes (which seemed like they would've been right in the middle of all those lightning strikes). Then I started thinking, "I've got to start shooting this!"

After a few unimpressive shots of lightning without much else (remember it was a new moon), I realized the sky was perfectly clear above the clouds in the valley below me. With that, I got the idea of shooting star trails with the lightning in the valley. So, with the lights of Furnace Creek in the bottom of the viewfinder, I started shooting 30-second images continuously for around 30 minutes. Looking back on it, I might have done better setting my camera on "Bulb" and doing a series of 4-minute exposures, but it is what it is; one thing to think of at my next opportunity.

I ended up blending about 60 shots in Photoshop, and what I came back with was something very unusual and almost unrealistic, but also really cool! A frame-wide lightning storm over Furnace Creek, with star trails running down into the clouds!

The night wasn't over after this, however. Turning around, I found the MIlky Way rising behind me. So, just for fun, I had to get a shot, not really sure of how well it would turn out due to the light pollution from Death Valley Junction, about 10 miles away. 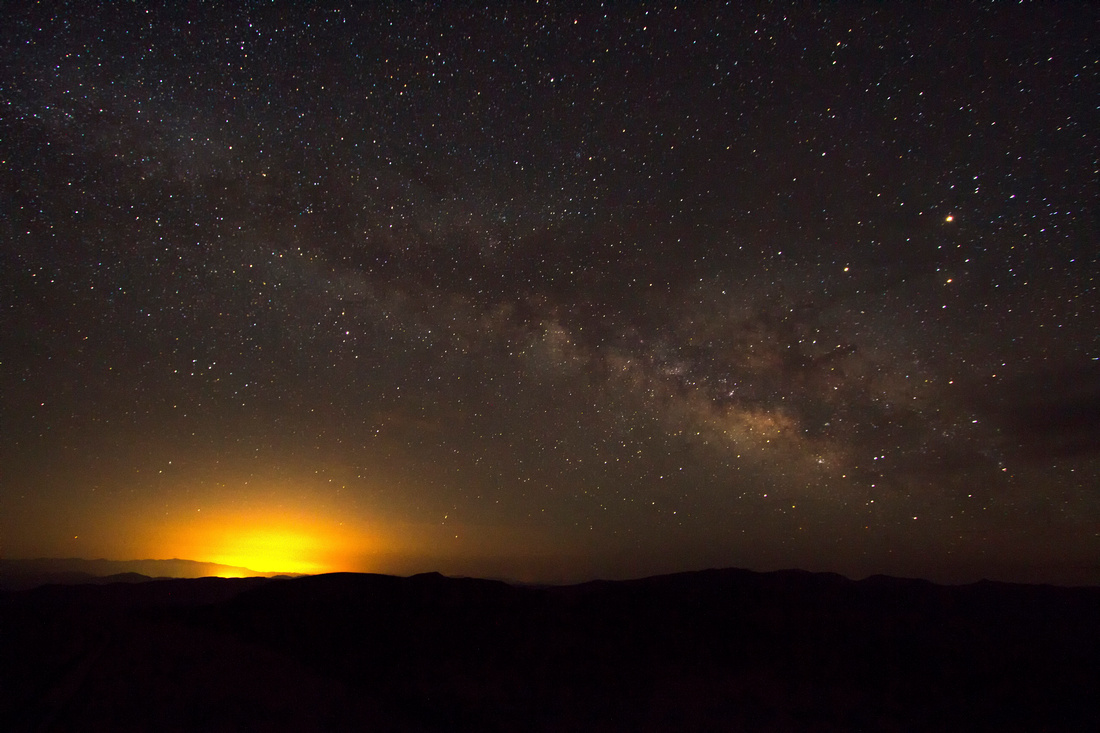 Finally, after a few hours of shooting, I'd pretty much covered what I wanted to catch. Plus I was freezing my butt off! It was 45 degrees and still windy, and I had planned to be down in the valley overnight with an expected low of 70, so all I had for insulation was a microfleece shirt, which doesn't help a whole lot in wind!